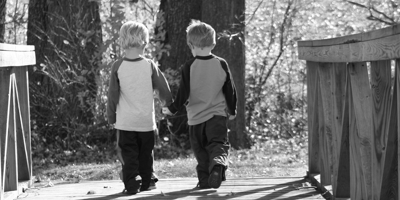 Human beings are creatures of habit. Change is an unwelcome visitor. But what is it about change that’s so unattractive? Seattle-based author and workshop leader Evelyn Clark learned an insightful lesson on the cause and cure for human resistance to change from an unusual source—two six-year-old boys. Twins.

Evelyn was leading a retreat for a corporate client on the West Coast that was about to go through an enormous change. Previously, the job of the inside sales department was to wait for the phone to ring and process orders from whomever was on the other end of the line. But as any businessperson knows, that’s not sales. That’s taking orders. The new plan was for them to become a real sales department—to start placing proactive, outbound sales calls to generate more customers and more revenue. The call center staff was paralyzed with fear. The retreat was designed to find ways the sales managers could help them overcome that fear.

Evelyn asked the participants to get up in front of the group and tell personal stories about change. What had they learned from their own experience about managing change in their work and personal lives? She believes telling stories of personal experiences helps people find creative solutions to business challenges. One participant told a particularly insightful story about his twin six-year-old boys that proved Evelyn’s theory.

As any parent knows, riding the school bus without mom or dad is scary enough for a first grader. But finding the way from the classroom to the bus at 3:30 by themselves is even more intimidating. There are so many buses! And they all look the same. His six-year-olds spent most of the school year getting comfortable with their exact route and pickup point every day. Then one day they were told their pickup spot was going to change.

The night before the big day, shortly after bedtime, dad noticed one child sleeping soundly, while the other was restless. He got his nervous little boy out of bed and asked him what was wrong. “I don’t know what I’m going to do, Daddy.” So his dad dressed the little boy up in his school clothes already laid out for the next day, and they went on an imaginary journey. “Pretend you’re in class, and the teacher says it’s time to go. Walk out that door and show me which way you’re going to turn.” The little one did as Daddy asked. “Now, let’s practice walking down the hall and across the parking lot to the pickup spot.” Two good attempts convinced both father and child that all is well.

“Now, who else in your class rides the same bus with you?”

“Okay, then you pretend I’m Johnny B. You practice asking me if it’s okay if you follow me to the bus.” After two or three attempts, the boy found a comfortable way to ask. Now he had a plan B. After a few more words of reassurance, dad tucked his confident young man in bed, and he fell right to sleep.

What the dad realized—as did Evelyn’s entire class from that story—was that people, even children, aren’t really afraid of change. They’re afraid of not being prepared for the change.

Telling this story is helpful for an organization going through change in two ways. First, for the people in charge of the change, it’s a reminder of how important it is to provide enough coaching and training so everyone can navigate the change with confidence and success. Second, and probably less obvious, is that this story provides comfort and motivation to those going through the change. It tells them that their fear is really about their own preparedness, not the change itself. The harder they work to prepare for the change, the more their fear will abate. They’ll be more likely to attend the training classes, ask probing questions, and generally take ownership for their own preparation.

Everyone knows getting trained can help you be more successful. But some people are comfortable with their current level of success, so they might not be motivated to train too intently. But if they recognize that being better prepared can also help them avoid weeks of paranoia and sleep loss and fear, even the most apathetic of employees will be highly motivated to prepare.

The next time your organization is facing a major change, share this story with the employees, and the boss. Everyone will sleep better.

In addition to a lesson about leading change, this story illustrates one more idea critical to any leader: often the best way to make a compelling point in the workplace is not by issuing a memo, but by telling a story. If you want to be a great leader, regardless of your functional discipline, develop your skills as a storyteller.

Paul Smith is a frequent Evoke contributor. He is a former director and 20-year veteran of the Procter & Gamble Company, and author of Lead with a Story: A Guide to Crafting Business Narratives that Captivate, Convince, and Inspire He’s a popular keynote speaker on many leadership topics, including leadership through storytelling. You can find Paul at www.leadwithastory.com

Interested in more posts by Paul? Check out Finding the Courage to Pursue Your Dream and get a sneak peek at a story from Paul's upcoming book, "Parenting with a Story".

This post was used by permission. Originally posted on October 19, 2012
Lead with a Story: A Guide to Crafting Business Narratives that Captivate, Convince, and Inspire, by Paul Smith