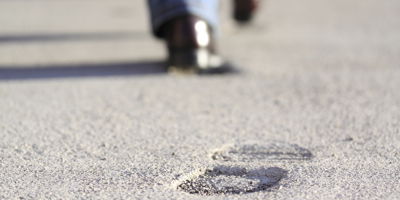 "Strive not to be a success, but rather to be of value." Albert Einstein

How many people worry, even obsess, how the future will judge them?

Presidents brood about their legacy while still in office. Some leaders fight the legacies of their predecessors while trying to establish their own, and countless decisions are made with future history books in mind.

Legacy can be influenced by today's actions and decisions, but not assured.

We cannot lead by trying to predict how the future will look back on our legacy. We must lead by looking forward and staying true to our principles and values that guide us.

This is a good week to reflect on legacy. My General Manager, Kevin Otero, announced his retirement from P&G after 26 years of service. I've worked for Kevin for a long time. For 7 years I've had a front row seat to his leadership, and watched him build the organization and business with uncompromising standards.

I remember the first time I interacted with Kevin. The Managing Director and I were proposing a new anti-diversion program to protect the Sebastian brand from unauthorized reselling. It was a stretch. We proposed an untried strategy with a brand new vendor and it required a significant investment. Kevin had concerns.

Kevin may have had reservations about the proposal, but he didn't have any about us. He let his values guide him and he said, "It's your business; you make the call. I'll support you."

Over the years the program became industry leading, and Kevin was one of its most vocal supporters. Even though he was ultimately responsible, he never talked about his part in the decision; instead Kevin credited those of us leading the program.

I can't say what Kevin wanted his legacy to be. He never spoke about it. Kevin didn't talk about how he was going to be judged by future generations. Instead he focused on doing the right thing, and valuing the people for whom he was responsible. He expected excellence and pushed us to do our best.

Some leaders enter and exit our organization, leaving no footprint or sign of their character. They are little more than a passing annoyance, or a brief shift in the wind.

The best leaders leave their mark, and we are better for our time with them.

A couple of months ago Kevin toured my organization, greeting people, many by name, and sharing stories from when he joined the business 8 years ago. It was great to see him engage with the people he valued so much, and express pride in our accomplishments.

As Kevin left the area, his footprints were everywhere.... The leader who didn't worry about his legacy, left a lasting one.

Kevin, it was a privilege to work for you. You are leaving a legacy of integrity, and we are proud to be a part of your Wella family. I wish you and your family all the best.

Looking for more inspiration on leadership? Take a look at Character Matters