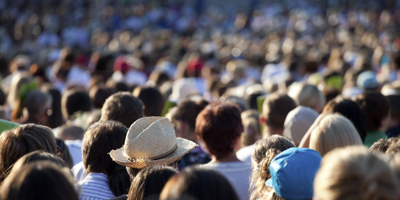 I have never been able to wrap my mind around the world's population.

I couldn't see myself in the sea of people, let alone see how I could make an impact on such a vast number of individuals.

But I can if I change my perspective.

Visualize with an analogy. It's a way to change the perspective of a concept that's hard to grasp to something more tangible. Here's the world's population, but scaled to 100 people.

Can you see yourself?

Poverty: 48 live on less than 2 US dollars per day

The World as 100 People Infographic

by JackHagley. Explore more infographics like this one on the web's largest information design community - Visually.

Looking for other ways to change perspective? Use imagery. Here's a link to Picture This: Audience Engagement that Works